A lot has been written about the GPz900r but there isn’t a lot of detail available on racing results.  There is a racing heritage, at the bikes first public showing at the 1983 Paris Motor Show discusses the intent to replace with a 750cc engine so it can be used for US Superbike racing.

But what is clear from 1984 the racing is the competition had more race-oriented motorcycles.  The Honda VF1000R & Yamaha RZ500 were all bikes designed for the track, not the street. They were expensive homologation specials, and back then pretty well everyone expected these  would be the bikes that set 1984 performance standards.  Honda were suggesting the VF1000R could hit 260km/h…..

So it is another testament to the amazing Ninja design that the bike not only trumped both of these on the street (which must have shocked Honda & Yamaha) but was super-competitive in production racing across many countries including Australia, where it was often competing against brand-spanking new machinery imported directly from Japan.  It’s competitive racing life Down Under was only 3 years as Production Race capacity reduced to 750cc in 1987, and there is no way a GPz750R was ever going to come anywhere near the wonderful Suzuki GSX-R750!

Back in ’84, of course, it was the ultimate rip-snorter. In that year my proddy-race GSX1100 was brim-full of illegal Yoshimura gear, yet the bloody bog-stock Ninjas still came steaming past before the end of the Snetterton straight.

The GPz900r ‘s most publicised Production Racing result was filling the podium in the re-introduced 1984 Isle of Man Production TT for motorcycles up to 1500cc!  However not quite an official clean-sweep, as the original second placed rider, Barry Woodland was disqualified due to a intake modification – despite it being a factory issued head. Ah well technical controversy, shows nothing really changes in motor racing!  And in those days it truly was production bikes, yet all of these bikes averaging over 103mph….

We had to ride on standard shocks, standard silencer, with lights still fitted. All that was removed was the side stand and the indicators and mirrors.

However the first significant race win for the GPz900r was probably right here in Australia.  The annual Easter races at Bathurst were legendary (for good & bad) and the Production Superbike race (Arai 500) run at the same meet as GP bikes was three times LONGER than the Isle of Man TT (June) on a racetrack (also a public road) almost as frightening for motorcycles as the Isle of Man.

And because Australia is half a season ahead of Europe it has always been an ideal testing ground for new Japanese machinery, so this was a production class (and championship) extremely well supported by factory teams from Japan & Europe, with new bikes often being shipped out directly from Japan.

According to a BMW monthly motorcycling journal the new GPz900r won in April 1984 ridden by Aussie legend Robbie Phillis. 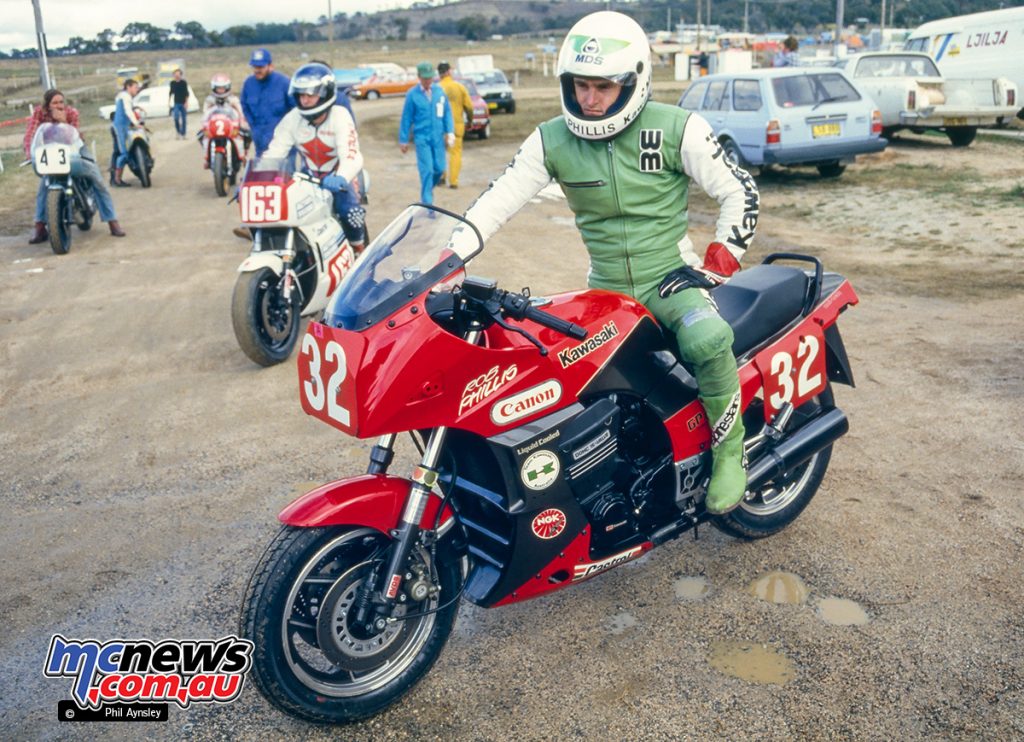 There isn’t a lot of info on the racing history of the GPz900r – so please feel free to forward any!

Aww, OK beaten into 3rd by two of the three fire-breathing RZ500 that Yamaha shipped out to OZ just for this competition!  Not helped with exceptional assistance from other lapped Yamaha riders (15:00)  But some great vision of the GPz900r racing as well as other production machines of the time.

Another great video of the Australia Road Riding Championship, Le Mans start as well.  Especially love Rob Phillis at 5:15 blasting past another Aussie legend – the great Wayne Gardner on the Honda VF1000F! Of course Gardner had the last laugh finishing second, the race was won by the Yamaha RZ500 with no Kawasaki making  the podium.

But this image surely gives insight as to the performance and industry impact the bike had, with just a 908cc road-bike making the bigger race-oriented factory Honda look slow.  Honda executives must have been mortified.

Check out the arcotrel1 channel, he has uploaded Parts II & III to give the full race TV footage.  Brilliant work mate!

Although I love my GPz I have an ever-lasting memory of my first road bike ride on a mate’s KR250 – which was hilarious compared to my Honda XR200. Thought it was slow and a complete show-pony until……lol! So a shout to one of the last two-strokes, the giant killer RZ500. 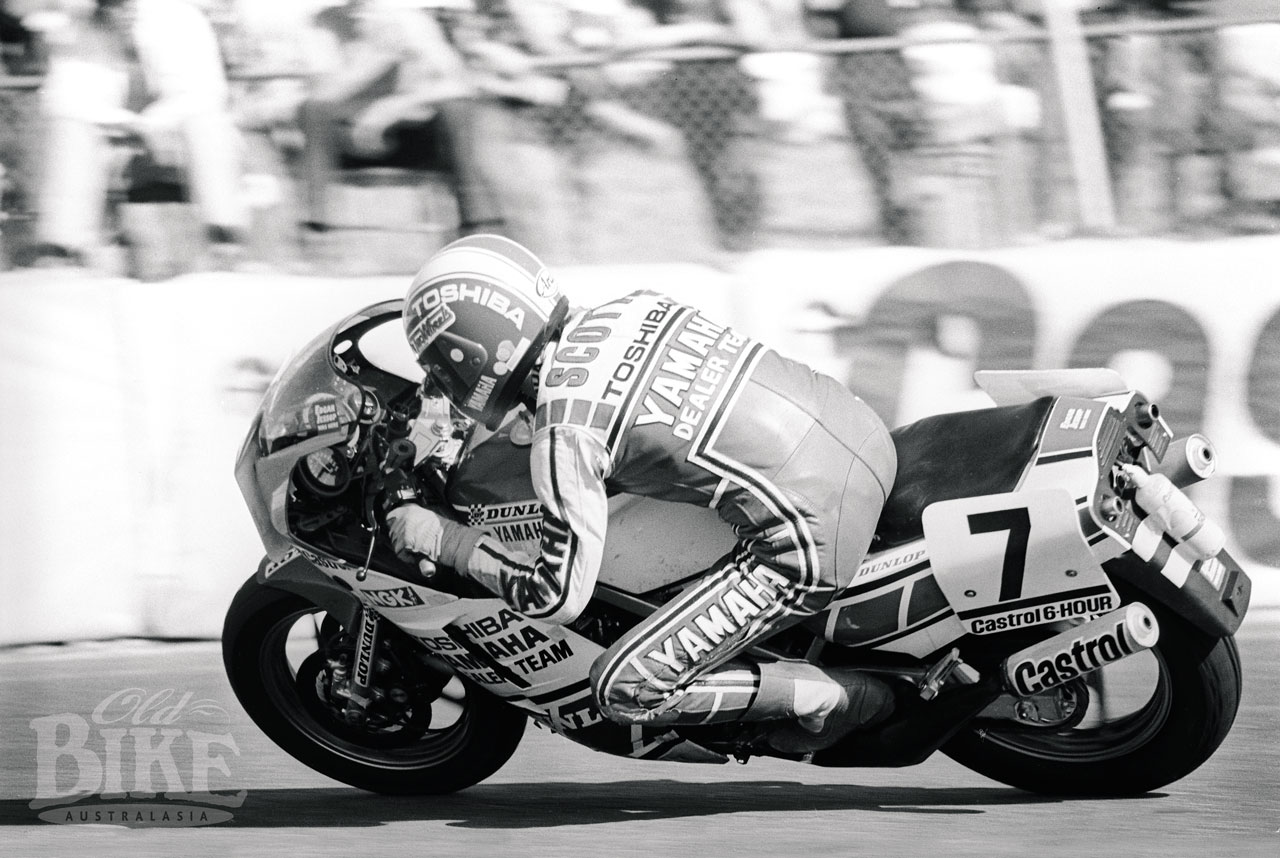 These production bikes all represented the the pointy end of performance and the annual Easter race event at Mt Panorama in Bathurst was legendary, for spectators (riots) and riders (racing)!  According to Rob Phillis being interviewed at the start the GPz900r won this race in 1985 (so probably not him), unfortunately I haven’t found the footage.

This 1986 race is simply brilliant, with has some great footage of the GPz900r vs the new GSX-R750 racing hard for the last half of the race.  After 3 hours of racing an amazing last lap & finish, however you might want to switch off before the very last corner…..grin!

Another great video of Australian production bike racing, with Len Willing leading the start of the race (great exhaust audio) the GPz900r is second by just a half bike length to the Honda VF1000R.  This win gave Honda’s its first Championship win for this series.

With the championship done & dusted Race 2 was purely for pride – with the GPz900r is second again. 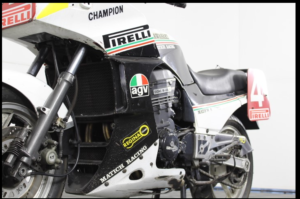 This WikiPedia link gives a nice history of the event and emphasises the importance Japanese manufacturers gave to the race, it certainly was a serious test then (and would be now) for any production machine.  There were some famous GP riders that raced here as well.

In the 1986 video above Len Willing is being interviewed at the start and suggests that the Kawasaki was competitive with the Suzuki 750 that won the race the previous year. So it would have raced but I don’t have any results.

Interestingly Rob Phillis won the 1983 race as a factory Suzuki rider on a Honda! What the?

Honda had brought out two new bikes, the VF860R I think, for just this race. But they simply weren’t going to make it running at full throttle for 3 hours, so the riders used the old VF1000R’s. Due to a conflict with their other factory rider Suzuki weren’t entering a bike, so being parked in the pits next to Suzuki were the new Honda’s. In a great example of sporting comradery Honda allowed Rob to ride one of these new bikes and Suzuki were more than happy as well to act as the support crew for the race.

The deal was apparently only finalised at 6pm the night before the race, so Rob had never ridden the bike until the actual day of the race! A great story.

Despite being 6 seconds slower Geoff Johnson repeated his success in 1985, this time on the maligned Honda VF1000F beating the GPz900r’s into 2nd (Bill Simpson) and 3rd (Howard Selby).  Amazingly Kawsaki’s filled seven of the Top 10 places that year, I’m guessing they were all GPz900r’s.

In 1986 Suzuki’s outstanding GSX-R1100 broke all previous lap & race records producing the first sub-20min lap by a production machine, taking the first nine of the top ten placings.  The winning elapsed race time waS almost 2min faster than the closest Kawasaki (1:02:44), almost breaking the magical one hour race time at 1:00:38.  Even the Class B GSX-R750’s race time was Faster at 1:02:10, so just two years after her release the GPz900r was well and truly eclipsed on the track.

There is no embarrassment here – it simply shows the extraordinary development of motorcycles that followed the GPz900r and just how darn good the Gixxer is on the track.

Because the previous Production TT races were only held up 1976, it’s also hard to gauge against these bikes.  In that year I’m guessing the iconic 250LC Yamaha actually won the race from a crazy assortment of other machinery, including 900’s from Kawasaki, Ducati & BMW. 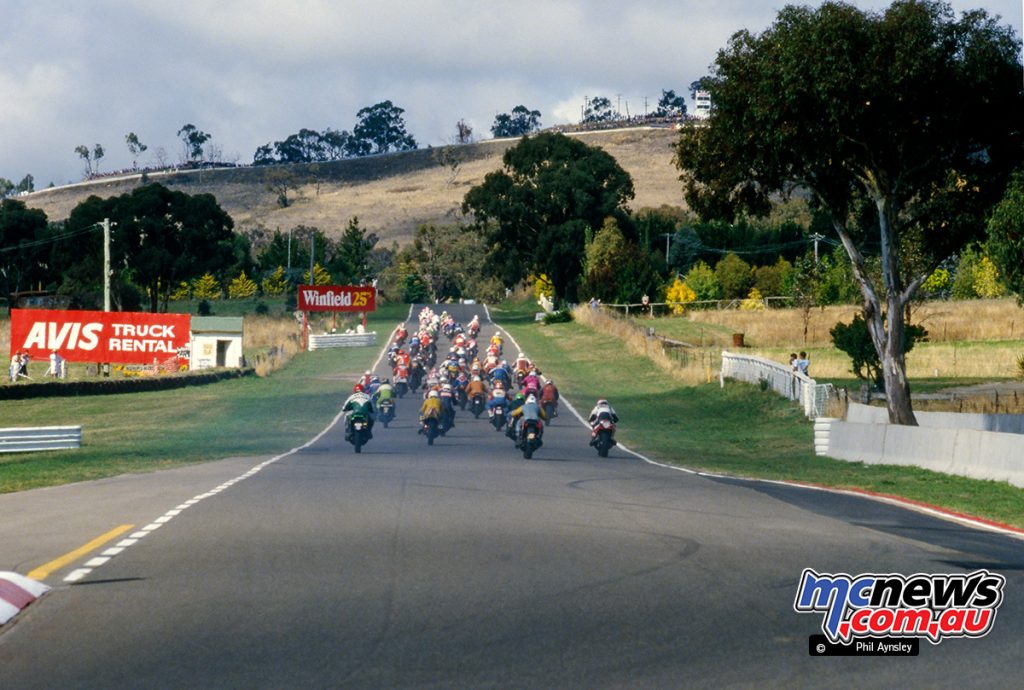 To put Australia’s premier annual Easter motorbike race into perspective – Bathurst was a THREE HOUR race, the Isle of Man TT event is just over ONE!  And with concrete walls, limited run-off on many corners and at that time a 1.9km long main straight down off the mountain it wasn’t for the faint-hearted, and has long been considered too dangerous to race motorcycles.

I’ve info that Aussie legend Rob Phillis on the GPz won the race in 1984 from this ACT BMW Motorcycle Club monthly journal and I’ve also found a 1986 YouTube video where Len Willing says he won the race last year with the bike, so perhaps he also won it in 1985? 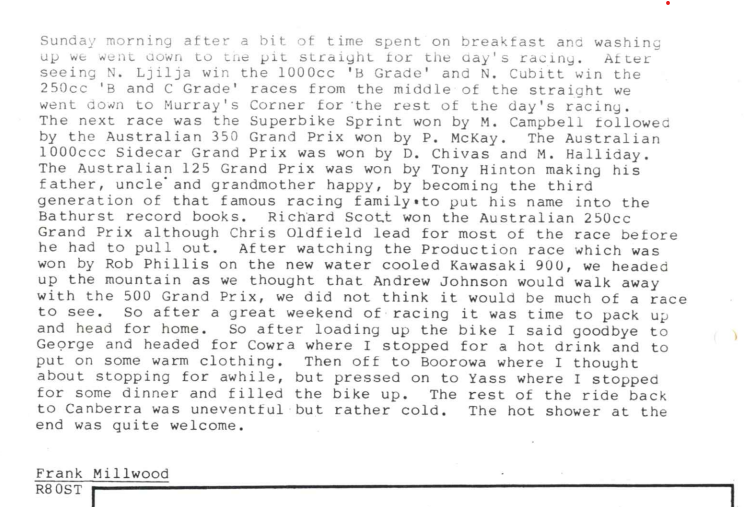 From the great man himself,  Robbie.P says although he did ride the bike he can’t recall winning any Production Races on it in 1984!

I only ever rode a GPZ 900 in 84 production races and it boiled its head off in the pit stops or busted a gear box in the 6h or run out of brakes in Tassie , and I crashed in someone’s fluid at Bathurst leading the production class of the 500 race in an outright podium position against the F1 and supers . And I can’t remember winning any production races in 84 , but I did in 85 on the Hone GSX750 proddy 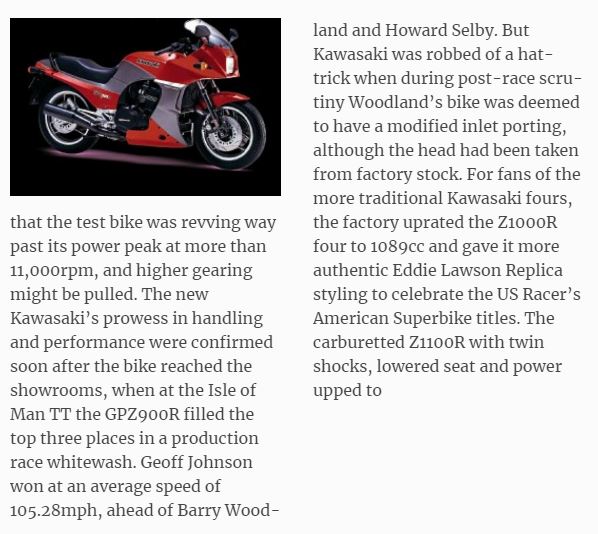 Because the previous Production TT races were only held up 1976, it’s also hard to gauge against the 1984 bikes.  In that year I’m reading that the iconic 250LC Yamaha actually won the race from a crazy assortment of other machinery, including 900’s from Kawasaki, Ducati & BMW.

My family loves older vehicles, the newest one we own is 2003!  But I am acutely aware of the ownership complexities especially:

So we often end up doing a lot of the research & work ourselves and this information gets stored either locally with the bike or online forums - although finding the useful parts in these forums isn't always simple.

The original goal of the site was simply somewhere for me to record service work & contacts on my GPz900r so that my kids (the one that likes bikes anyway!) could easily access it - it doesn't concern me if it was publicly available.

I then realised that with this online structure in place I could also offer it to other owners, and the site could potentially expand to record other owners experiences and expertise , meaning we can learn from others but also pass on this knowledge to subsequent owners of these wonderful motorcycles.

At least Covid-19 has given me plenty of spare time to pursue my passion for the motorcycle!

The information provided on this site (or links) is personal experiences from non-professional home-mechanics, so neither it's accuracy nor it's validity can be confirmed.  If you need professional advise please visit your local Kawasaki dealership or a qualified industry professional.

Like riding any motorcycle, at the end of the day the only opinion that really counts is your own!